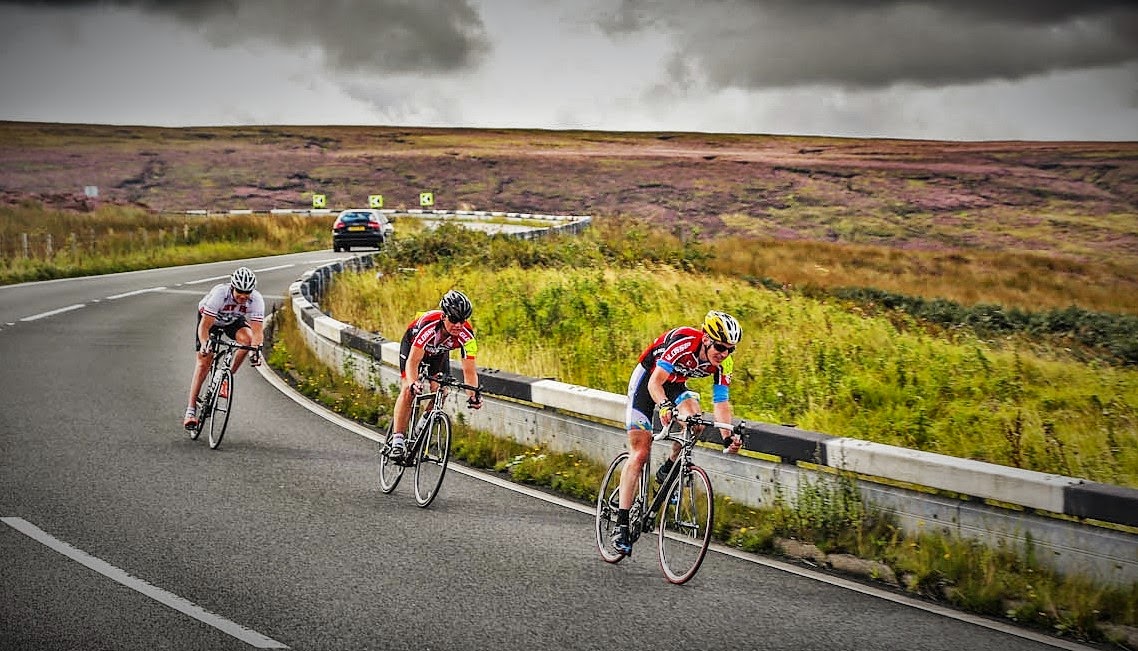 Congratulations Paul Talbot for bagging Snake Pass, 27x up the 1100ft ascent and he even managed a
Hill Climb event with 2013 national champ Tejvan Pettinger during the challenge. 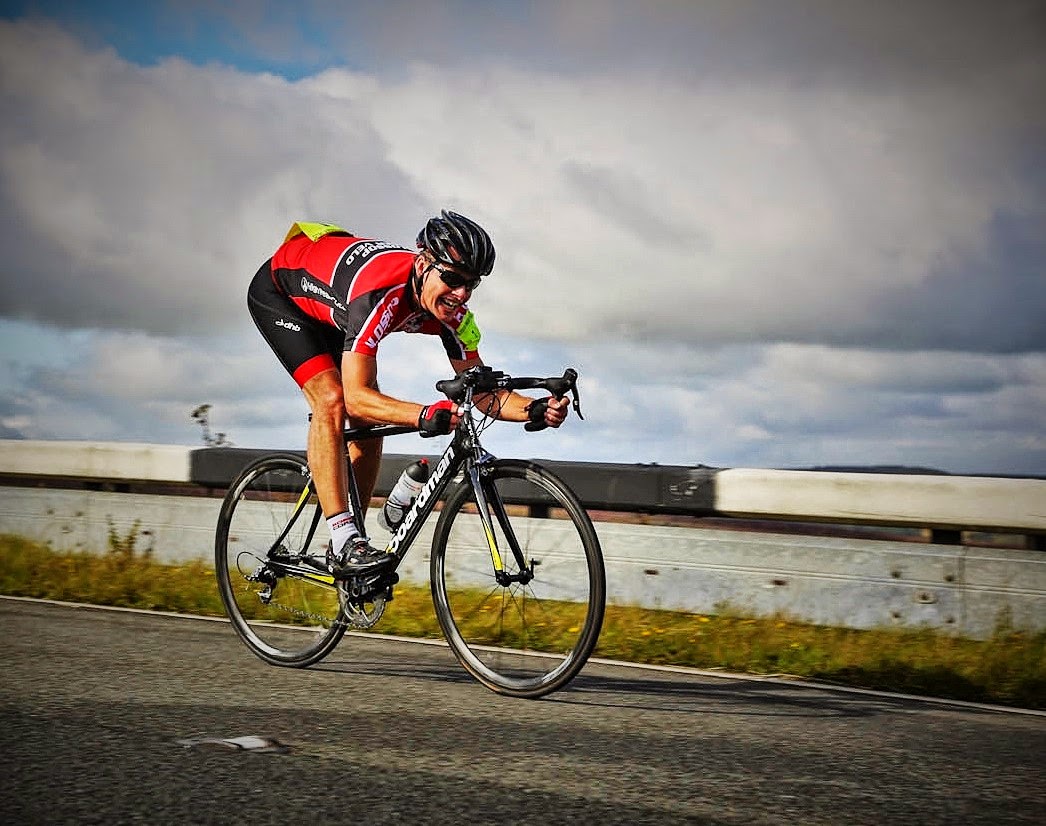 I rediscovered the joy and pain of cycling only five years ago and ever since I’ve been looking for new ways to suffer. I’ve managed to escape from Stravaworld but not before accruing an indefensible number of KOMs that I’ve now left for my younger, skinnier and harder fellow masochists to conquer. I’ve ridden many of the UK’s toughest sportives and survived to tell the tale, so what’s next? I’ve done Mount Teide and the cobbled climbs of de Ronde van Vlaanderen, so… the Alpes, the Pyrenees… the Himalayas?!

Everesting the Snake Pass seemed an inspired idea at the time – our club was hosting the J9/5 Open CTT hill climb in 2 weeks time and I’d been given the dubious privilege of being first rider off, so why not just carry on? 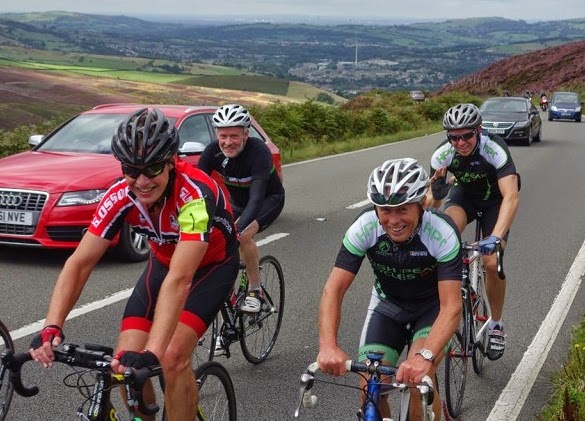 A plan nurtured by a few beers did not seem so good in the cold light and sobriety of the next day, when reality dawned. For starters, there are only so many daylight hours in early September, fewer than 14 in fact. A back of the envelope calculation was therefore required: the Snake Pass climb is 3 miles long and ascends 1,100ft, so exceeding 29,029ft equates to 27 reps, 1 every 30 minutes over 180 miles. I can do the climb in less than 16 minutes at full gas and 20 minutes taking it easy, so allowing 5 minutes for descending and a few more for refuelling and other stuff, game on! I took some comfort in the notion the Snake Pass was a splendid choice for Everesting – it has a near constant 8% ‘Alpine’ gradient, smooth road surface, long sweeping bends and not too much traffic – it’s even got a pub at the bottom! Barring an energy-sapping headwind, success was a nailed on certainty or so I thought…

Fast-forward 2 weeks and it’s 6.30am on an overcast Sunday morning. My long-suffering wife (and 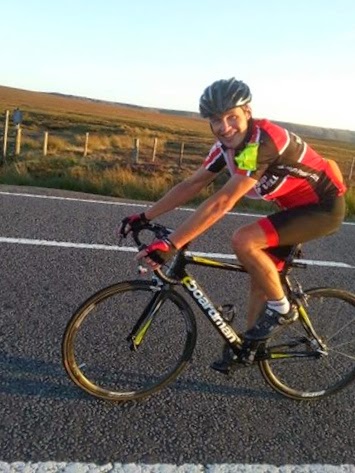 cycling widow) Anne and daughters Hannah and Beth have sacrificed their day of rest to my plight. Fellow mentalist Ben Watson has joined me for a dual attempt and a few more club members have volunteered to escort us in relay. We’d already managed to raise £500 for Myeloma UK so expectation was high and the pressure was on.

Our plan was to pause after the 5th rep so I could do our club’s official hill climb and then we’d carry on. The first 5 reps felt like they were for free but after pushing the peddles for the first time on the 6th rep (16.41 minute ascent at 11mph), I started to feel the chain. It didn’t help we were passed by riders going full gas, every minute for the next 2 hours but we still managed to maintain steady 22 minute ascents at 8mph. Tejvan Pettinger – the reigning National Hill Climb Champion - won our event in a time of 11.51 minutes, just outside his own course record and then joined us for one more ascent – a big boost for morale and a great motivator! Unfortunately, by this time Ben was starting to suffer and was continually getting dropped despite a following wind and our best efforts to keep him within the group. By the 15th rep and over 16,000ft of climbing, it was clear he wasn’t going to make it so he decided to slow down and get to ‘base-camp’.

It was now a solo attempt. Anne posted my progress on Facebook, the donations flooded in and 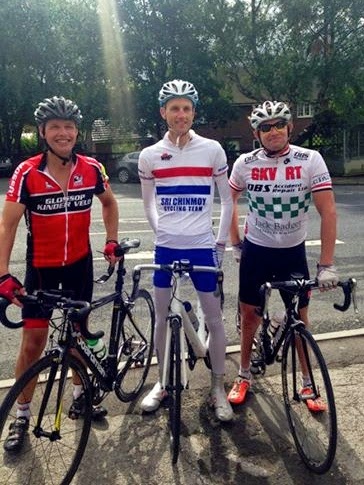 increasing numbers of people came along to support my attempt. Despite this, I reached a psychological low point late-afternoon when I realised I’d have to ride into the night because I still had 60 miles and over 10,000ft of climbing to do. The help from my fellow club riders and support from spectators, family and friends kept me going – the sound of cowbells each time I returned to the foot of the climb was fantastic. We broke the £1,000 barrier with 5 reps to go, but by that time it was dark and I was starting to feel punch-drunk - I couldn’t stomach solid food, didn’t want to talk to anyone and was acutely sensitive to even the slightest increase in gradient. I was also getting worried I couldn’t see the road properly on the fast descents and my reaction times were slowing due to fatigue. It was at this point the cavalry arrived – 4 club riders with MTB lights illuminating my path and keeping me safe from harm. With only 3 ascents to go I thought it was in the bag, but on the penultimate climb my legs started to cramp. I made the silly mistake of sitting down on the last ascent, despite riding mostly out of the saddle until that point, and half way up had to stop in agony. I recovered only to stop again due to cramp within spitting distance of the summit. It was only in the last few yards I actually topped 29,029ft, a little too close for comfort – I could not have ridden any further. The sense of achievement and relief was simply overwhelming and the warm welcome and congratulations I received from everyone who waited for me was humbling. I’d just missed closing time but the landlord had kept the pub open for us - a cold beer never tasted so good!

Top tips on Everesting from a non-expert; 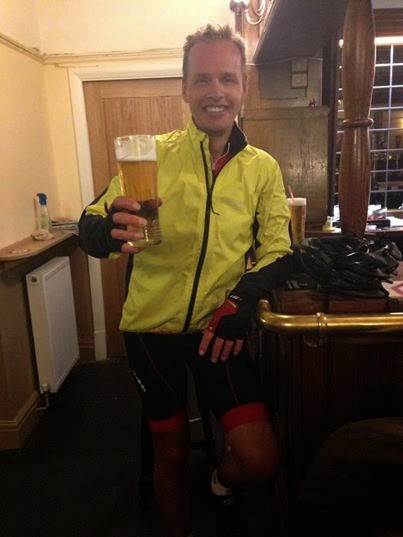 2 Start at a slow comfortable speed then ease off a bit – try to keep a constant pace and don’t pause for too long before or ride any differently on the last few ascents to avoid cramping. I managed to maintain 22 minute ascents (8mph) for the whole attempt apart from the 6th (11mph) and last that took over 40 minutes.

3 Do not underestimate the value of support from club mates, family and friends – I couldn’t have done it without them!